BAYKED Festival is coming back to the Embarcadero Marina Park North on Saturday, April 20th! BAYKED By the Bay will bring you music, munchies, & more for a unique 4/20 event filled with experiences you’ve never had from 2-9pm! Enjoy the amazing weather of San Diego and one of the best locations to catch the sunset, surrounded by vibrant views of the water alongside friends. Featuring live performances from Gramatik & Brasstracks, PLUS Big headliner Rick Ross!

BAYKED will have a fully stacked music lineup – with plenty of surprises in store! Expect there to be amazing music all day from 2-9 PM! The BAYKED line-up will include local DJs, live performances from Gramatik & Brasstracks, and a VERY special headliner Rick Ross

Rick Ross is a rapper and label boss from Mississippi who has received Grammy nominations. He remains a prolific artist, both as a solo performer and as a guest, and his Maybach Music Group has put out albums by artists including Wale, Meek Mill, French Montana and Teedra Moses.

His styles and influences are mostly a blend of dubstep, electro, trip hop, hip hop, and glitch. He grew up influenced by American hip hop artists like RZA, Dr. Dre, DJ Premier, and European electronic music of the early 2000. Gramatik has released 9 albums, 3 EPs, numerous singles and remixes and was nominated for European MTV Music Award in 2014. In 2013 he established his own record label Lowtemp allowing him to further realize his idea of music being a free medium. Soon after the launch Lowtemp started signing aspiring artists from all over the world.

Check Out His Featured Song – “So Much For Love”

Their songs and covers spread quickly through the internet, and since then, they have toured with Lido, Nao, Mr Carmack, Jack Garratt & GRIZ; played iconic venues,  & festivals such as Red Rocks, Coachella, made songs with GoldLink, Anderson Park, Wyclef Jean, Lido, Khalid, and have dropped critically acclaimed music of their own.

In 2016 they produced arguably the biggest Hip-Hop record of the year – Chance The Rapper’s ‘No Problem’ featuring Lil Wayne, & 2Chainz. This led to GRAMMY nominations for Best Rap Song, adding to a nomination for writing on Anderson Park’s ‘Am I Wrong’ and one GRAMMY win for Best Rap Album for their contribution to Chance’s ‘Coloring Book’. They also released their debut EP, Good Love. During a heavy summer ’17 festival season playing all over North America, they released part one of their most recent two-part project “For Those Who Know”, boasting collaborations with Robert Glasper, The Underachievers, & more.

They kicked off 2018 with their first headline tour, playing 19 cities, & selling out over half of them. With part II of “For Those Who Know” coming this summer, the year is about to get even bigger for these 2 Grammy winning musicians.

Check Out Their Live Featured Song – “Officially Missing You”

San Diego is a foodie haven, and BAYKED is committed to bringing the best and yummiest food to you at this all-encompassing festival! Featuring Dang Brothers Pizza, El Chingon, Meze, Gnarly Nachos, Bread & Cheese, The Brazilian Guys, and Plantitude. Enjoy spirit libations and beers with a full bar on site! Your taste buds and stomach will be thanking you endlessly for blessing them with so many treats at BAYKED 4/20!

What’s the “more” you ask? There’s so much more! Get educated and experience the space of California’s top cannabis vendors. Other event highlights include live art demonstrations, Photo ops, interactive games, local retail boutiques, and the Urbn Leaf Feel Good Lounge. Plus a silent disco, Yoga session with Tabu, hammock area, and more!

Regardless of the origin of 4/20, it now marks a community celebration of a makeshift holiday where friends gather to enjoy life & spread the Feel Good vibes year after year. Plus the location – this peninsula near Seaport Village in Downtown San Diego has some of the best bayside views San Diego has to offer.

BAYKED is exclusively benefiting the Pioneer Foundation. The Foundation supports individuals with developmental disabilities to live a fulfilled life and integrate in society through innovative, community based micro-entrepreneurial programs consistent with the strengths, interests, and skills of Adults with ASD.

Purchase BAYKED tickets today and experience a 4/20 event like no other! 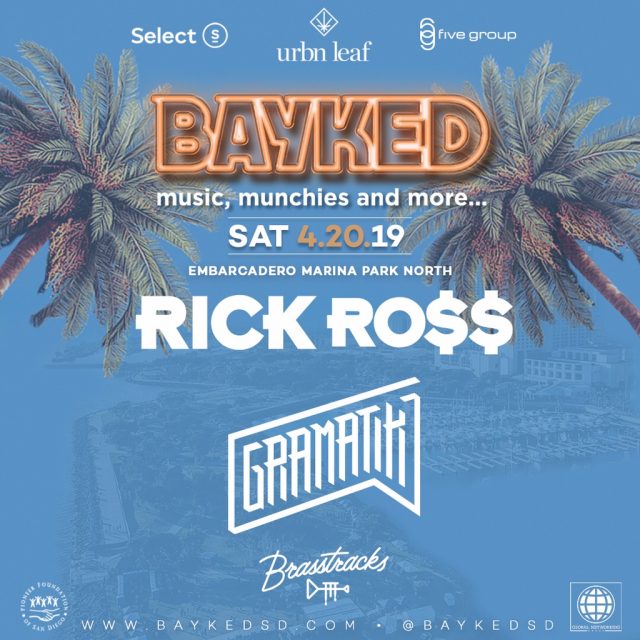 Please note: This event will not have any marijuana products of any kind available for purchase and is meant to celebrate the significance of the 4/20 holiday with great music, incredible views, and good vibes galore! Although it is now legal to smoke in California, please remember to abide by public smoking laws.